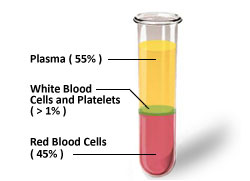 Plasma is in everyone. Plasma is yellow in color and is the liquid portion of the blood in which blood cells are suspended. Plasma serves a variety of functions, from maintaining blood pressure to supplying critical proteins for blood clotting and immunity. Plasma makes up about 55% of total blood volume and is composed of mostly water (90% by volume) plus dissolved proteins, glucose, clotting factors, mineral ions, hormones and carbon dioxide.

Plasma is vital to creating life-saving medical products for those in need and dedicated people choose to donate for many reasons. Some donors have a friend or family member who has benefited from plasma products. Certain donors have rare plasma that contain specific antibodies for treatment of rare diseases or may be highly desirable for medical research. Some donors may be enticed by the payment you can receive or by the satisfaction of helping others.

Plasma is collected through a process called Plasmapheresis – it’s safe, sterile and very simple. The process is similar to donating blood. However, the plasma is separated from the red blood cells and the red cells are returned to the donor. Donors are also given a saline solution at the end of the donation process to replace any fluid loss. Plasmapheresis is performed by trained medical professionals, using a one time use disposable collection system. The disposable is discarded following donation. All donors receive a new disposable set at each donation.

The donation process takes about an hour from the time you enter the center and is administered with the donor’s health and well-being as the top priority.

Plasma donors save lives. Here are some useful facts

Plasma is found in all of us and is mostly composed of proteins. These proteins are rich in antibodies and clotting factors and can be separated through a process called fractionation. Each of the separated proteins can be used to treat specific diseases.

Hemophilia is a hereditary bleeding disorder. The blood of individuals with hemophilia does not clot. This disease is treated with Factor VIII, a protein derived from plasma.

Alpha-1-antitrypsin deficiency is a hereditary lung condition in which the lungs do not have the ability to defend themselves against diseases and pollutants. Over time, the lungs become less and less able to function. This medical condition is more deadly than the emphysema caused by smoking. Plasma donors provide important proteins which enhance the lives of individuals with this condition.

Albumin is made from plasma and is used to treat burn victims, trauma patients, and individuals in shock.

Immune Deficiencies There are more than 100 primary immunodeficiency diseases. These are treated with a medication called "IVIG" or Intravenous Immune Globulin. This drug is made from combining plasma of a variety of donors. By combining the plasma from many people, a mixture of strong and diverse antibodies is created. This drug is given to treat any one of these primary immune deficiency diseases. IVIG may also provide other health benefits to needy patients and some products are used to treat selected neuropathy patients. There are other uses for specific immune globulins and more uses being determined each day through medical research.

Learn How to Donate